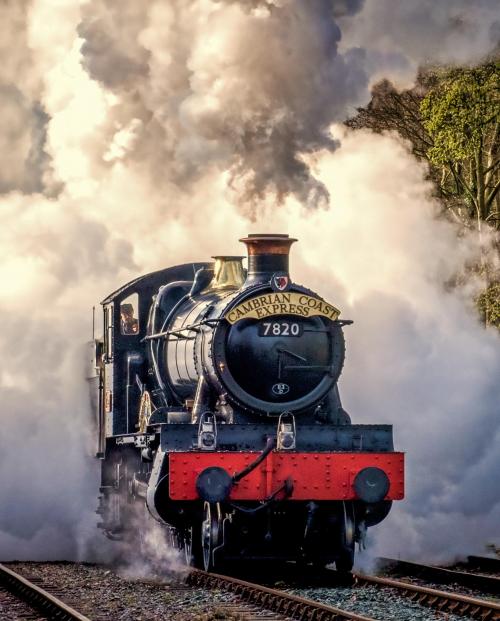 The Churnet Valley Railway PLC celebrate its 25th Anniversary this year having been formed on 30th October 1992. Throughout the year a series of events is planned to mark the occasion, culminating in a 25th Anniversary Gala over the weekend of October 20-22nd.

We are delighted to announce that the first of two guest locomotives can now be announced. Agreement has been reached for the visit of former GWR Manor no. 7820 Dinmore Manor courtesy of its owners Dinmore Manor Locomotive Ltd and current base the Gloucestershire Warwickshire Railway. The locomotive will arrive in October and operate public services over the gala weekend only, before operating a series of Driver Experience charters and photo charters. 7820 is an appropriate locomotive for CVR25, with sister locomotive 7821 having seen out her final years of her boiler ticket working at the CVR between 2005 and 2007. However 7820 will become the first member of the Manor class to tackle the steep incline to the Ipstones Loop along the Cauldon Branch, in fact she will be the first ever GWR tender loco to venture this deep into the Staffordshire Moorlands!

The October event will also see a second guest locomotive visit, with both visitors working alongside resident S160 no. 5197 and TKh no. 2944 "Hotspur" which itself will be making one of its first movements following the completion of an intermediate overhaul that is currently getting underway. Also visiting the CVR courtesy of the North Norfolk Railway will be a pair of Mk1 TSO's to supplement the current carriage fleet resident on the line, with these vehicles staying on the line until March 2018 therefore helping to increase capacity not only for October's event but also the increasingly popular Santa & Steam services as well as 2018's Winter Steam Gala. And so the opportunity will not be missed for an evening 10-coach finale to be operated to Ipstones on both the Saturday and Sunday evenings of the gala itself. Consall Loop should also be available for use following completion of repairs to the embankment that forced its closure late last year, and to ensure the contribution that diesels have played in the CVR's 25 years resident 33102 'Sophie' will join in the action on Friday 20th before taking up her usual Thunderbird role for the main weekend.

Further details will be announced in the forthcoming months, but for now we hope the excitement of a BR Black Manor tackling the Cauldon Branch will suffice.
Picture Courtesy of Inspiring Images