Churnet Valley Railway is a delightful heritage railway located in the picturesque Staffordshire Moorlands offering something for all the family. Featuring heritage steam and diesel locomotives, the 10-mile line is open to visitors on selected dates throughout the year. Sit back and relax in our 1950/60s carriages as you journey through beautiful countryside that takes in rolling hills, the River Churnet and the Caldon Canal. Our friendly staff will be on board the trains and at our faithfully restored stations to serve refreshments and offer an insight into the railway and the local area.

Deep Hayes Country Park is 60 acres of glorious countryside with a mixture of woods, meadows and pools.
There is a car park with toilet facilities.

A beautiful place in the heart of the Churnet Valley, full of heritage features including the canal and early railways.  There are walks, long and short.

There are picnic tables and a tea room and gift shop.

The present gardens were designed and created by William Podmore OBE and are open on certain days of the year. The gardens are also available for weddings. 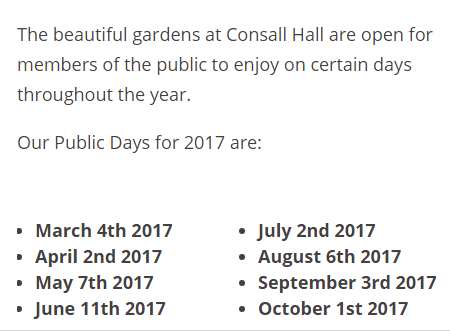 Cheddleton Station is located towards the northern end of the current Churnet Valley line and is the operational headquarters of the Churnet Valley Railway. It is one of only three original Churnet Valley Stations to have survived demolition in the 1960s and 1970s (the other two being Rushton and Alton).  Built in 1849, reputedly designed by Pugin , its existence today is purely down to the quick thinking of a member of Cheddleton Parish Council who prevented its demolition in 1974.

Froghall station is the current southern terminus of the Churnet Valley Railway, and the starting point for many visitors with it's large car park situated along the A52 at Froghall.

The station houses a beautifully recreated tearoom, as well as the commercial offices of the line. It is also licenced for Weddings and Civil Partnerships.

The railway hosts a selection of special events throughout the year, as well as its tradtional weekend running from Easter until the Autumn.

There is a limited amount of the parking at the reserve.

There are signposted circular walks and the Staffordshire Way passes through.

A producer of high quality craftsman designed hand-thrown domestic stoneware pots of handsome and distinctive design, oven/dishwasher and microwave compatible. Something with that little bit of difference.

Book a pony ride whilst you visit.

Peak Wildlife Park offers a truly unique and immersive animal experience. Our large walkthroughs allow you to come face to face with exotic and endangered animals from across three continents. Whether you love lemurs, have a passion for penguins or want to wander with the wallabies, our park has something for you. The kids will have a wild time enjoying our indoor soft play and giant bouncy castle; whilst mum and dad sample our wide range of refreshments and delicious stone baked pizzas!

RSPB Coombes Valley reserve is a delightful oak woodland – especially in spring and early summer when lots of migrating birds come to breed at the reserve. Birds you may see on the steep valley sides include flycatchers, redstarts and wood warblers. There are a wide variety of butterflies to spot too.

The house and estate itself, was called Alveton Lodge, or Alton Lodge, during it's early life, and was the summer residence for the Earl of Shrewsbury and his family. When Charles, became the 15th Earl, he took more interest in the house and its grounds, and decided to extend it. Work began in 1800, and continued, with major work being done, or planned every year until 1852. The lakes, and pools were dug by hand, and water was diverted from a spring at Ramsor, two miles away. In the years 1806-1807, 5,000 conifers, and 8,000 other trees were planted in the grounds.