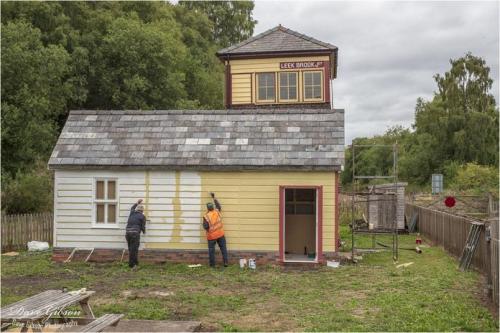 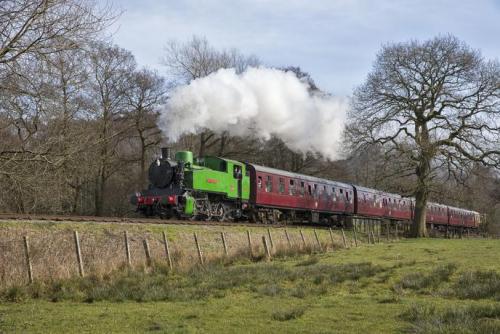 2018 sees the charitable North Staffordshire Railway Company (NSRC) celebrate its Ruby Anniversary, having been incorporated as a charity on 2nd November 1978. The charity provided the basis for what has now developed into the Churnet Valley Railway, with the company continuing to offer support to the operating company which itself celebrated its own Silver Jubilee in 2017.

To mark 40 Years since the Charity evolved into its current form, a weekend of services along the current Churnet Valley is planned using a mixture of both steam and diesel locomotives along both the Churnet Valley and up the steeply graded Cauldon branch. Taking star billing at the event will be diesel locomotive no. 33021 Captain Charles, operating to Ipstones for the first time since 2015 following bodywork repairs. As part of her recent repair work a full repaint has been completed and it to be revealed at the event, she previously carried the livery in the early 00’s. This striking livery will certainly provide a contrast to her previous Blue livery, and her return to service will be very much welcomed by the line’s volunteers who have completed all the work at their Cheddleton base.

Joining the Captain will be shunt locomotive 08633, which itself has also received a repaint over the last few months. This has seen the locomotive returned to its originally BR Green livery and identity of D3800, so she will look exactly as she did on her day of delivery to her first railway shed at none other than Stoke on Trent. This local favourite only retired from mainline service in 2016 and with work being completed to allow her to haul passenger trains earlier this summer, a smarter look for her has now followed for visitors to enjoy.

The diesel line-up will be completed by the NSRC own locomotives, flagship 33102 Sophie and shunt locomotive No6 Roger H Bennett. Sophie has seen regular service along the CVR over recent years since her preservation by the NSRC in 1993, and become the mainstay of the diesel fleet in recent years. Roger meanwhile is normally confined to yard duties, and this weekend offers a rare opportunity to travel behind this locomotive, named after one of the line’s original volunteers who sadly died in 2006.

However such a celebration wouldn’t be complete without steam, and this is provided by the line’s three steam locomotives. American S160 no. 5197 first arrived on the line in 2001, and has since become iconic with the line and popular amongst many many visitors. Built by the American Army to provide a simple locomotive for operating in liberated lands during World War 2, 5197 went straight to China in 1945 where she was to spend the next 40+ years operating in the Coal Industry around Fushun. She was then preserved and shipped to Wales in 1995 where she was restored at the Llangollen Railway prior to her sale in 2001. Since her transfer of ownership there have been many highlights, notably hauling loaded stone trains for the 150th Anniversary of Merehead Quarry in Somerset and hauling the Polar Express recreations at Telford.

Joining 5197 will be sister locomotive no. 6046, returning to Staffordshire following a period on hire in Somerset. This locomotive did get sent to France as part of the D-Day landings, before ending up in Hungary where she became part of the operational fleet of the Hungarian State Railways post WW2. Transferred to the Hungarian National Museum upon withdrawal, the locomotive was accidentally sent for scrap due to an administrative error. However a British Pilot stepped in, and was able to save her and shipped her to the UK. However he was unable to complete the restoration, and so she was sold in 2006 and transferred to the CVR where her restoration was then completed in 2012. She became the first steam locomotive to be completely restored at Cheddleton by the line’s volunteers, and her first moves on UK soil on 29th June 2012 was a proud moment for those involved . Since then she has gone on to operate all over the UK, with her highlights being to operate the first season of steam hauled Polar Express in the UK and hauling a recreational WW2 Military Goods train at CVR.

The final locomotive in action will be resident Polish Tank no. 2944 Hotspur. Saved from scrap in 2013 by the line’s volunteers, a full overhaul was completed by the group within their own Cheddleton workshops and a return to service came about in June 2014. Since then the locomotive has gone on to operate over 25,000 miles along the Churnet Valley, and proved to be a very capable locomotive for the line. Her moment of fame arrived in 2015 when she was featured in Michael Portillo’s “Great British Railway Journeys” with the former MP enjoying a footplate ride himself onboard Hotspur.

Highlight of the event will be the opening Leekbrook Station, including the recently reconstructed waiting room built to the original design and supported by both Peak Leader and Moorlands Partnership Boards.

On the railway, and intensive service will operate along the Churnet Valley line whilst a selection will run to Ipstones along the steeply graded Cauldon Branch – culminating in a 8-coach Loadex on both Saturday and Sunday where the line’s residents will haul every serviceable coach to Ipstones. On Saturday the lead will be taken by the pair of S160s whilst both Class 33s will be on the rear to add to the load and take the train back to Froghall, whilst on the Sunday the pair of 33s will take the lead with both S160s on the rear for the return journey. Both of these trips will be a sight and sound to behold for all visitors, and prove a fitting finale for this Anniversary event celebrating what has been achieved by each and every volunteer over the last 40 years. Additionally the railways engine sheds will be open, so you can view the latest progress on the next restoration project – former LMS 8F no. 48173. Expected to take a further 3x years, you can see what has been achieved to date since the restoration got fully underway at the start of 2018.