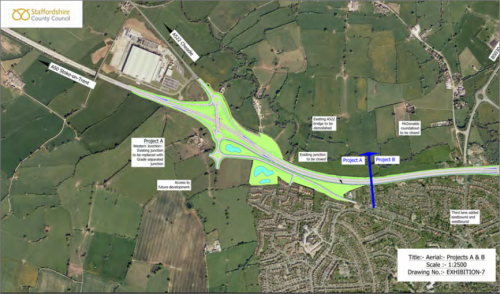 Information from the  A50 Growth Corridor Team, Staffordshire County Council

The final major piece of work for Project A is scheduled for the end of September. Immediately after the current work on the A522 is complete the ‘old’ bridge, which originally carried the A522 across the A50, will be demolished. To allow the work to be carried out as quickly and safely as possible, the A50 will be completely closed in both directions from 8pm on Friday, September 28 until 5.30am on Monday, October 1. The A50 will be closed between the A521 roundabout at Blythe Bridge and the B5030 roundabout at Uttoxeter.

We have done as much of the preparatory work as possible in advance to reduce the amount of time the A50 needs to be closed. The knock-on effect from the diversion will mean that some local roads will be busier than usual that weekend. We would like to thank everyone for your understanding and suggest you allow extra time for your journeys. Highways England will put in place advance notices on its wider A-road and motorway network, including the M1, M6 and A38, to encourage traffic to take alternative routes. During the closure signposted diversions will be in place, suitable for all vehicles including HGVs. The media has been notified and national radio stations will also be told closer to the time so they can include the closure in travel bulletins.

The demolition work consists of placing protective matting on the A50 carriageway to protect the surface from the machinery which will be breaking down the structure piece-by-piece from the top down. No explosives will be used. Once the bridge deck has been dismantled and the rubble removed by lorry, the central support and side walls will also be pulled down. The work will be around the clock and inevitably there will be some noise coming from the site. We’ve assessed it with environmental health officials and with windows closed we expect it will sound less than the volume of a dishwasher, or background music in a restaurant. We will use water spray whenever needed to keep dust under control and the site will be tidied and cleared to reopen on Monday morning.

The diversion route will be the same for vehicles travelling in both directions. From the East, traffic will be diverted northwards from the A50 at Uttoxeter on to the B5030 for a few hundred yards to the roundabout with the A518. Traffic will turn right there, cross back over the A50 along The Dove Way and continue on the A518 clockwise around Uttoxeter and follow the road towards Stafford. Vehicles will then follow the A51 and A34 towards Stoke-on-Trent, before joining the A500 and then the A50 to Blythe Bridge. The route is reversed from the West. The Shell petrol station, which stands on the westbound carriageway a few hundred yards west of the B5030 roundabout, will open as normal and access will be maintained at all times via the A522. A522 The current work to remove the south embankment and lower the level of the road by 20ft is progressing well and will be completed before the A50 closure begins. Diversions remain in place and maps showing the alternative routes are available here or by going to www.staffordshire.gov.uk and searching for ‘A50’.

Importance of the A50

The A50 is the most important transport link between the East and West Midlands and the planned improvements will also benefit major employers and their employees between Stoke-on-Trent and Derbyshire, making journeys quicker, easier and safer. Staffordshire County Council is delivering these improvements on behalf of Highways England. We will continue to update you as the project progresses.