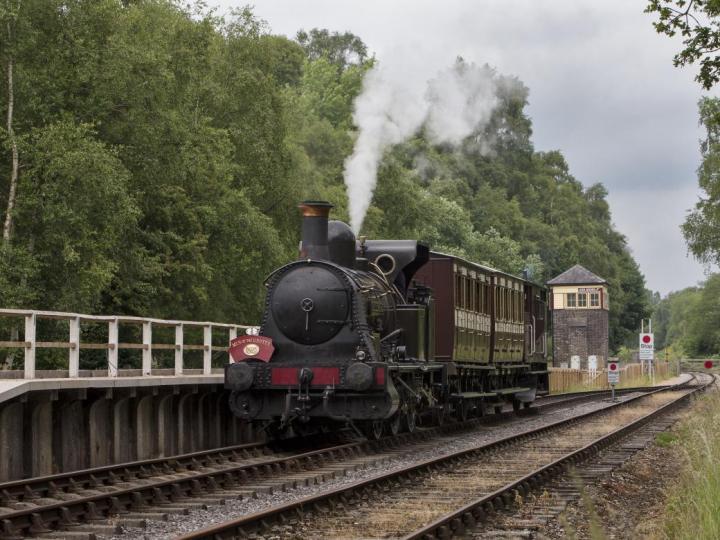 Leek Brook Junction forms a 4-way junction less than a mile from Leek, once offering journeys in all four North / South / East / West directions. Built primarily as part of the North Staffordshire Railway Company's (NSR) Churnet Valley Line running North to South from Macclesfield to Uttoxeter that opened in 1849, it was joined from the West by a line from Stoke via Milton in 1867 followed by a line heading East to Waterhouses and Cauldon Lowe in 1905. This at one time saw three signalboxes built to handle all the traffic, though following removal of the North Chord in the 1930s this was to be reduced to just one.

A railway station was opened by the North Staffordshire Railway (NSR) in 1904 consisting of an island platform with two faces on the Stoke line, though there was a single platform on the down line (i.e. North bound) of the Churnet Valley Line which served the St Edwards Hospital Tramway..

The railway station was a very quiet station that wasn't even advertised in timetables and was described by the NSR as a halt. Passengers to and from Stoke-on-Trent used the platforms on the Stoke–Leek line and walked over to the Churnet Valley platform to catch a tram to the hospital. Passengers wishing to head south on the Churnet Valley line towards Uttoxeter would have to catch a northbound train to Leek and then return through Leek Brook on a south bound train. Leek Brook railway station closed to all traffic on 7 May 1956, after the hospital railway closed two years previously in November 1954.

Freight trains continued to pass here despite the notorious Beeching cuts closing most of the areas rail network, as the Sand Quarry at Oakamoor offered sufficient traffic to keep the Stoke - Leekbrook and Leekbrook to Moneystone sections opened. This traffic though ceased in 1988, and by 1992 a preservation group was created to preserve the former Churnet Valley Line from Leekbrook to Moneystone. on 24th August 1996 the "Churnet Valley Railway" operated the first steam-hauled trains between Cheddleton and Leekbrook, since which they have gone on to extend services South to Froghall and also taken over 4.5 miles between Leekbrook and Ipstones on the Waterhouses branch.

In 2012 the Heritage Lottery Fund granted the Churnet Valley Living Landscape Partnership £1.89million to restore and preserve the landscape of the Churnet Valley. As part of this the CVR's charitable support body the "North Staffordshire Railway Company (1978) Ltd" (NSRC) worked with the CVLLP to restore the surviving Grade 2 Listed Signal Box This box is the oldest remaining example of its type, being built by MacKenzie and Holland for the NSR.

When the project came to start, the building was bereft of any physical access to the upper storey and the first element of this project was to replace the stairs, landing and porch to a similar design to what is believed to be the original, which was completed in 2016. The second element of this project is to restore the mechanisms in the signalbox to full working order, which as of February 2017 is awaiting for a full collection of parts to be completed before installation work commences.

The exterior brickwork was re-pointed in appropriate materials and style to suit the original design, whilst windows were also repaired/replaced as necessarysticking to the original. The final element of the project was to provide public access and facilitate interpretation of the use of the building. And so the former Hospital platform has been renovated, and the track slewed to run alongside the platform thus allowing the public to dismount here and view the workings of the signalbox during selected open days. Public Access is only possible on these selected dates.

Next in the pipeline is formal completion of the operating signalling equipment, and the provision of a toilet facility by rebuilding the original waiting room to the exact style that was once here. Additionally an interpretation display will be provided giving a brief history of the Hosital Line and explaining why the station and signalbox are where they are.

This page was last updated on 8 March 2017. Contribute here if you have information or photos to add to this page.