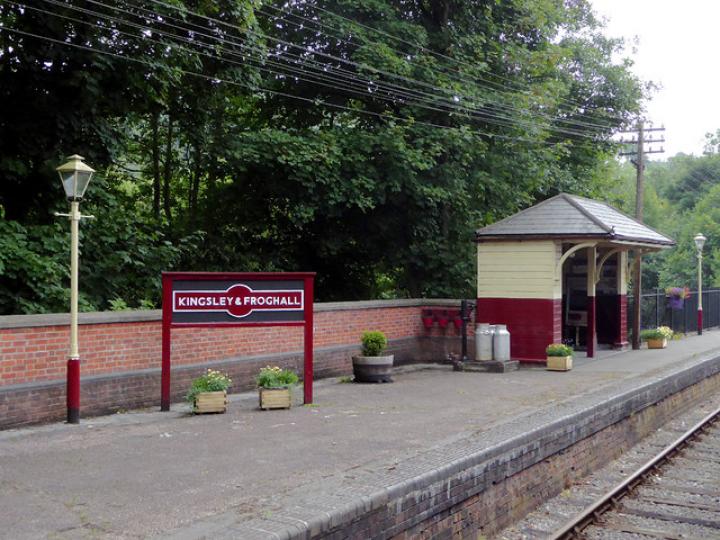 A stone built railway station at Froghall, serving the Churnet Valley Branch Line of the North Staffordshire Railway. The railway has an adjacent stone built bridge.

In January 1849 the North Staffordshire Railway closed the Uttoxeter extension of the Caldon Canal, as part of the their construction plans for the Churnet Valley Line from Macclesfield to Uttoxeter via Leek. Kingsley & Froghall station was built near to Froghall Wharf, the new terminus for the canal, to serve the communities of Froghall, Kingsley & Whiston. Opened in 1849 it was to survive grouping and nationalisation but following the line's closure in 1965 as part of the Beeching Cuts, the station was demolised. Following the succesful re-opening by preservationists of the line from Leekbrook to Consall, a third share issue was launched to reopen to Froghall, which achieved its aim in 2005 including the building of a completely new station and platform incorporating facilities for a modern tourist attraction whilst maintaining the image of a heritage railway from the 1950s.

The UP platform was not restored at first however, as this had originally been built overhanging the River Churnet which passes directly below and for which iron railings are provided to prevent passengers from falling into the water below over the turbelent weir. In 2007 work started on restoring this however, following the original method of construction. The platform and associated waiting shelter were cantilevered over the river using old rails - exactly how the original NSR had done. The "bent over" ends of the original rail are noticeable from the DN platform by looking across the railway line itself, as they are about half way up the brick wall used to construct the UP platform.

This restoration was nominated in the National Railway Heritage Awards, and came joint first in the "National Express East Coast - Volunteers Award" along with the Great Central Railway's restoration of Rothely station.

This page was last updated on 17 March 2017. Contribute here if you have information or photos to add to this page.