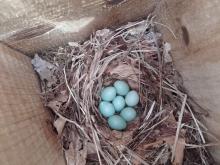 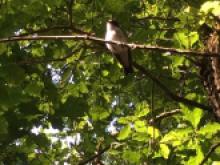 We are very pleased to confirm that nest boxes that we have been installing in Cotton Dell in recent years have been very successful this year and we have achieved the goal of encouraging pied flycatchers to nest.

This declining, charismatic species of old oak woodlands has not been confirmed to breed at this site before, despite the habitat appearing suitable. It appears that lack of natural nest cavities may be one reason as there has been a good take up of boxes by other species too, including a nuthatch.

We do only have one confirmed successful nest currently with chicks, but there was another nest attempt and another singing male elsewhere on site, so we hope this may lead to a population establishing itself in the future.

Thank you to Leek College's supported learning group and to the local National Lottery Winners group for donating and helping to install these boxes!