My top doggie day on #StaffordshireDay 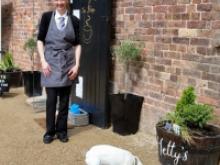 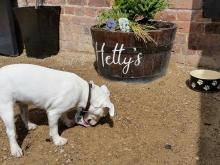 Some people say they think I've got a bit of Staffy in my genes even though I am meant to be a Parsons Jack Russell. Anyway, I was happy to celebrate Staffordshire Day with a heritage walk round the Froghall plateways. There was a big group of humans and three other dogs. My fellow terrier, Woody, had come down from Foxt and was very eager to follow the plateway up from Froghall basin. The humans stood around in the winding house hearing the leader John Higgins talk about the route of the last plateway and where the chains went.

Meanwhile Woody stood outside shouting about how we needed to get going. Apparently Woody knows the routes quite well and was obviously keen that we take the diversion towards Foxt to see an 18th century tunnel. He went up to the big black dog and told him we needed to get going down the steep steps. It turned out that the big black dog and his human waited at the top because the slopes were slippery and he might have pulled too hard and caused an accident. So in the end it was just me and a bunch of humans that went on this little diversion to see what is possibly the oldest true railway bridge in the world. John said the earlier ones didn't count because they weren't approved by an act of parliament.

All the humans were a bit puffed out by the time we regrouped at the top. By that time my mate Woody had been taken home because his human was fed up not being able to hear John Higgins giving his informative talk. I'm sure the talk was very fascinating, and my human said there is possibly a big project to be done preserving these plateways if they win the bid for the money. Sounds good to me as I guess that means we'll get to go walkies there quite a bit. It's a good place to walk, and all the humans seem to enjoy themselves.

For me the highlight was Hetty's tea room at the end of the walk. Now that place is a good addition to the Churnet Valley in my opinion. A business that has thought of my needs and is stocking my favourite thing: ice cream. Not just any old 99, oh no they are stocking special dog ice cream. So I say, bring on this plateway project because I am all set to be visiting Froghall Wharf any time that Hetty's is open.

Pity my mate Woody had to be taken home, he'd have enjoyed a pot of ice cream as i know he is very motivated by treats! Worth behaving for, I'd say. Next time Woody ;-)