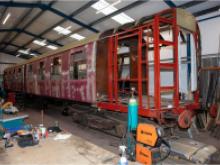 2020 saw the North Staffordshire Railway Company (1978) take the lead on acquiring more coaches to support the future expansion of Churnet Valley Railway's services into Leek. Whilst the first COVID lockdown disrupted both the supporting charity and the CVR themselves, this project still proved to be a relative success and come early summer the volunteers and staff from Batt Holden Ltd were able to make extensive progressive with the first restoration - TSO E3809.

The plan had been to have the coach ready for the Santa trains, but sadly time just ran out on the full time staff and combined with low volunteer numbers due to the ever changing restrictions, the companies had to admit defeat. Currently staff are semi-furloughed, and volunteer numbers controlled as part of the third lockdown, so further progress is still limited and yet slowly but surely efforts continue to have the vehicle available for service in the 2021 season (whenever that is able to commence).

Efforts are currently focussing on what is the south end, which appears to have been the worst effected from sitting outside for a number of years. Upon removing the outer skin it was obvious that a repair had previously been carried out on this end, but instead of completing a full repair plates had simply been fitted covering over the damaged sections. This had allowed water to collect behind the platework leading to substantial corrosion occurring and the subsequent requirement to replace the complete side panel, all of the framework, as well as three roof sections and associated beams. The inner crash repairs have required the obligatory bottom section replacement alongside the full floor - a common repair for many Mk1 restorations theses days. Finally both buffers and their housings have been completely overhauled during this time, whilst the corridor connection slide guide underwent such also.

Further updates will be provided in due course, with the plan being to have E3809 re-enter service during this year. For now though if you wish to support the coach appeal, the NSRC is still £1500 short of the £14,000 needed to cover the purchase of this and two other vehicles. If you are able to support please do no matter how small, for as shown last year £5 here and there soon builds up when combined together.
https://www.totalgiving.co.uk/appeal.co.uk/appeal/cvr_coaches

PICTURES COURTESY OF MARK O'BRIEN
The extent of the repairs can be clearly viewed in these pictures, the outer crash pillar is completely replaced, along with all the supports, and side framework.

The East side undergoing the same work as the West side, the only difference being that the door hangs off this part of the framework.

New framework in place, just final trimming and painting before the new skin is fitted.

This also shows the framework which holds the two water tanks for the toilets.