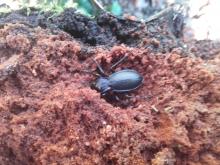 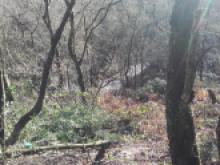 The last two weeks I’ve been working with the volunteers at RSPB Coombes Valley, joining forces with staff and volunteers from the RSPB to do some habitat management. We were clearing holly from the understory in a woodland compartment at Coombes – some of the rare species found at Coombes and across the Churnet valley require woodlands with a dense canopy and an open understory hence they benefit from the holly being removed.

Read Mel’s blog to find out more about the dramatic success this programme of work has already had on populations of redstart and pied flycatcher.
http://www.rspb.org.uk/community/placestovisit/coombeschurnet/b/coombesc...

The work will also indirectly benefit veteran tree ecology in the long term as removing competition from the holly will allow the canopy trees to grow larger and to develop all the features that veteran trees are so important for, like standing dead wood and rot holes.

While working I actually found a violet ground beetle in a dead birch stump – these beetles are predatory and this one was probably hunting saproxylic weevils. This just shows how a rather innocent looking stump can contain an entire mini ecosystem in itself.

Again, it was great to work alongside partners making a positive change on the ground. This collaborative working is definitely something we’ll be continuing in the future.