Riverflies in the river Churnet 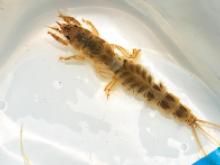 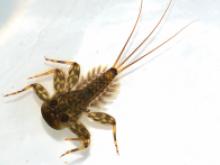 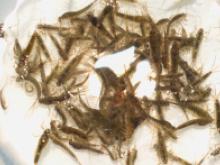 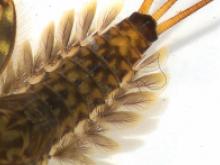 This week the volunteers and I conducted our first riverfly survey of 2018. We visited 3 sites in the upper catchment of the Churnet and kick sampled for riverbed invertibrates. This is part of a nationwide scheme and our data will be fed into that nationwide database that the riverfly partnership can use to target action where pollution is an issue.

Throughout the samples we found seven of the eight target species - so not bad at all, particularly for this time of year! Some samples were better than others but that is to be expected.

Firstly we found flat bodied mayfly larvae (see the pictures above where you can see the leaf shaped gills that allow the larvae to take up oxygen from the stream water). These guys, as the name suggests, have evolved a very particular body shape that means the faster the water flows the harder they become clamped down to their stone of choice.

Secondly we found cased caddis flies who build cases out of gravel, stones, sticks and other types of material and lashed together with silk. It used to be thought that these cases were for protection from predators however it has recently been discovered that they are specially shaped to direct the maximum amount of water flow to the larvae mouth parts where they can sift out the maximum amount of food particles.

Another mayfly larvae we found was the olive mayfly. In fact one sample contained well over a hundred individuals - so quite impressive for this season. In addition we found caseless caddis, stonefly, native freshwater shrimp and and true mayflies.

All these species react poorly to certain types of water pollution so the abundance data we collect can indicate the overall health of the watercourse. So we'll be carrying out the surveys throughout the year and feeding the data back to the relevant people to ensure all is well in the Churnet.